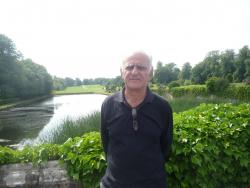 George N. Vlahakis is Lecturer in Hellenic Open University in Patras, Greece, and Fellow Researcher in the Institute of Historical Research / National Hellenic Research Foundation.
He has studied Physics (B.Sc., 1983), Oceanography (M.Sc., 1987) and History and Philosophy of Science (Ph.D., 1991)
His main research interest is history of science in South-Eastern Europe with a focus on comparative studies in the framework of the so called “periphery-center” scheme
He has participated in many international Conferences and he has published papers and books in Greek and English. He is also editor of thematic volumes and special issues of scientific journals.
He is member of several academic societies. He is also correspondent member of the International Academy of the History of Sciences and founder member of the Commission for Science and Literature of DHST/IUHPST.
Among the subjects of his research are: History of sciences in Southeastern Europe 18th-20th century), Science and Religion, History of earth sciences, Science and Society in the independent Greek state, Science and Literature.
He has participated in several research projects as senior researcher and has organized a number of international and national conferences.