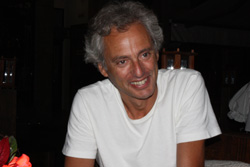 History of science in Byzantium, the Ottoman Empire and the Greek State. The spreading of Modern European science. History of the relations Science - Religion

Born in Athens, obtained the Baccalauréat in France, studied Physics at Paris XI-Orsay and History of Science at the Ecole des Hautes Etudes en Sciences Sociale, Paris (with R. Taton).
Collaborator of the National Observatory of Athens (1979-1984), he joined the Programme of history of science of the Institute for Neohellenic Research (now Institute of Historical Research) of the National Hellenic Research Foundation in 1984. From 2003 he is the director of this programme. President (2013 - 2017) and Secretary General (2005-2009 and 2009-2013) of the International Union of the History and Philosophy of Science and Technology / Division of History of Science and Technology, Permanent Secretary (2017-) of the International Academy of History of Science. Coeditor of Almagest and of the Newsletter for the History of Science in Southeastern Europe. Coordinator of the programmes Hephaestus (E.U., FP7, Capacities), NARSES (E.U., National Strategic Reference Framework NSRF), DACALBO (E.U., National Strategic Reference Framework NSRF) and SOW-Science and Orthodoxy around the World.