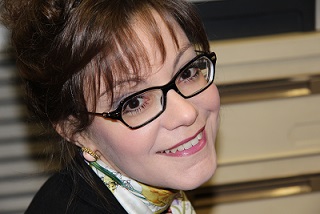 Michela Malpangotto, Onassis Fellow for International Scholars, visiting scholar at the HPDST Programme of the Institute for Historical Research of the National Hellenic Research Foundation

November 4, 2016, Dr Michela Malpangotto arrived in Athens in order to launch, in collaboration with HPDST (IHR/NHRF) and the University of Athens a research project on the scientific exchanges between Byzantium and European renaissance.

From Greece to Europe: Bessarion's programme at the origins of modern science (15th-17th centuries)

Michela Malpangotto is the chair of the History of astronomy department at the Observatory of Paris. Her research focuses on the origins of the scientific revolution, between astronomy, mathematics and humanism in the 15th-17th centuries. Among her recent publications are Regiomontano e il rinnovamento del sapere matematico e astronomico nel Quattrocento (2008) and « The original motivation for Copernicus’s research : Albert of Brudzewo’s Commentariolum super Theoricas novas Georgii Purbachii », in Archive for the History of Exact Sciences, 70/4, 361-411. Her edition of Georg Peurbach's Theoricae novae planetarum will be published at Les Belles Lettres in 2017.

The project From Greece to Europe: Bessarion's program at the origins of modern science (15th-17th centuries) that Michela Malpangotto undergoes thanks to the 22nd Onassis Fellowships Program for International Scholars yearns to reconstruct the evolution and the history of the astronomical and mathematical works which arrive in Italy in the 15th century thanks to the Byzantine scholars and integrate European culture of the Latin West. Michela Malpangotto’s aim is namely to show in which way the transmission of the ancient texts together with their printed editions of the 16th century, which enlivens the renewal of the scientific culture all around Europe in this period, actually derives from Bessarion’s original program of preserving, translating and reviving the Greek culture as a precious heritage to the Latin West. This will show how, in the 16th century, thanks also to Regiomontanus’ efforts, the scholars all around Europe have grasped and achieved at the same time what actually was Bessarion’s intellectual heritage.
Zoom Kobe Venomenon VI 6